The Townbelt Walkway borders two new subdivisions at the northeast edge of Cambridge. (number 9 on the inset map) 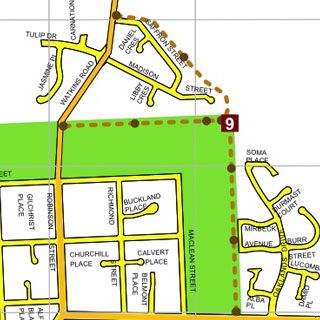 The two subdivisions are relatively new, Saffron to the north and Oaklands to the east in this map clipping. They are built just beyond the Green Belt, and two of the legs of the walk shown here follow the outer edge of the Green Belt, one from Watkins Road to the walks' junction here highlighted by the "9", and the other from Thornton Rd to the "9". The third leg of the walk is from further along Watkins Rd, in a northwesterly direction to the "9".

The word "swale" is used to designate some of these green zones, where (from an on-line dictionary) "a low or hollow place, esp. a marshy depression between ridges" acts as a drainage area. The Cambridge Tree Trust has already done much work here, and much is still to be done. The long term plan is to develop an arboretum containing significant stands of trees grouped by species. There already exist some well-growing stands in a "Rimu Triangle" and a "Totara Triangle". In 2016 and 17 we planted the Maple Arboretum.

Another development in the swale areas is a series of planted circles, each designated as containing one (sometimes two) species. Walking in from the Watkins Rd end, you will pass and will in time be able to identify clearly stands of Tarata, Pokaka and Koromiko, Puriri, Titoki, Cabbage trees, Tanekaha, Maire, and Rewarewa.

The initial planting was a big job, and great help was provided by hundreds of school children.

But this development is not without its problems. Protection plants such as Tree Lucerne and Corokia have been included; when they thrive they tend to conceal what they are protecting, but some of the plants they are intended to protect have nevertheless suffered from frost, while others others failed to survive the the 2008 drought. Replanting is an ongoing job; for example, 98 replacements were planted on 22 April 2008, and another 100 or so in-filling a week later, and a further 125 the following week.

This area has now merged into the Brian Mayo Reserve.