Six years ago I pondered whether this 100 year old tree near the gates to Te Koo utu would survive the construction of the new roundabout. Thankfully it is still there, so time for an update.

‘Around the World in 80 Trees’ tells me that this tree played a ‘critical role in the development of civilization’. Its native range is now confined to isolated mountains of Lebanon, Syria and southern Turkey, but vast cedar forests once stretched across the Eastern Mediterranean to southwestern Iran. And cedar had everything going for it, which is probably the reason for its downfall. Tolerant of both summer drought and winter freezing, its wood was a valuable commodity, used for building the palaces and temples of Assyria, Persia and Babylon, and the trading ships of the Phoenicians. The ancient Egyptians used its resin for embalming the Pharaohs before their burial in the pyramids.

Over-exploitation of cedar is already evident in the 4000 year old Sumerian ‘Epic of Gilgamesh’. Conservation efforts were made including in AD 118 the creation of an imperial cedar forest by the Roman emperor Hadrian. Perversely, it now seems that global warming may help reverse its decline; a recent search for a forest species which will thrive in central Europe in coming centuries shows that Cedrus libani may fit the bill.

Apparently planted as a seed by a soldier returning from the Middle East after World War 1, this tree deserves our respect, and given a chance it may live another 2000 years!

This tree, standing sentinel above the entrance to Lola Silcock Park in Bath Street, is the same protected tree I wrote about last month. But this time we will be looking at the historical significance of the species.

Native to the United States east of the Rocky Mountains, the Black Walnut is easily recognised by its huge crown and dark, ridged bark. Its nuts are deeply corrugated and very tough, making them resistant to rat attack. Despite the difficulty of breaking them however, black walnuts have been used for oil and protein by indigenous Americans for over 4000 years. Their flavour is more intense than that of the ‘English’ walnut. Today most of the harvest of black walnuts comes from near Missouri.

The tree has had a strong association with the American military since the nineteenth century. The wood is very solid, shock-resistant and buffs up to a handsome chocolate-brown with a fine raised grain, giving a good grip. During the Civil War in the 1860s it was invaluable for making gunstocks, and this gave rise to the saying ‘shouldering the walnut’, meaning to join the army. Walnut husks were used to dye the homespun uniforms of the Confederate soldiers a brownish-grey colour, and also to make the ink with which they wrote letters home to their loved ones. In World War I the wood was used to make aircraft propellers, and in World War II powdered walnut shells were mixed with nitroglycerine to make a form of dynamite. Finally in a macabre twist, the wood is also used to make the coffins we have seen on TV being unloaded from military planes. (Around the World in 80 Trees) 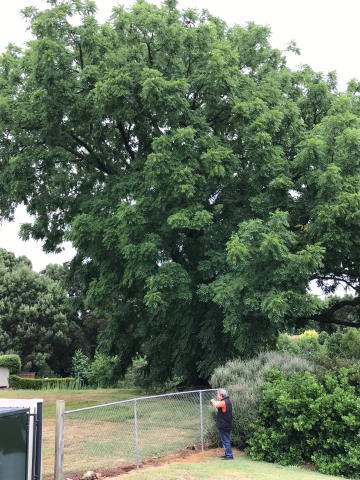 Seen here near the Senior Citizens Club, the Pōhutukawa can grow 20m high and almost twice as wide, moulding to the coastal wind and slope, and spreading its weight over unstable ground whilst sheltering the root system exposed on bare rock. But if you want to grow it at home for a Christmas tree it is very amenable to pruning, or can even be grown in a tub.

The first recorded association of Pōhutukawa with Christmas was as a table decoration at the celebrations of the Nga Puhi chief, Eruera Patuone, in 1857. This modern association with Christmas seems rather at odds with its traditional Māori connection with death. Pōhutukawa means ‘place of leaping’, and of course the most famous tree is the 800 year-old one at Cape Reinga which guards the entrance to the sacred cave from which the spirits of the dead begin their journey to Hawaīki. In Māori myth the red flowers represent the blood of the young warrior, Tawhaki, who fell to earth while trying to reach the heavens to avenge his father’s death. Pōhutukawa is also a star that connects Matariki to the deceased, and it is through Pōhutukawa that Māori remember those who have died in the past year.

For Māori the tree had a medicinal use; the inner bark, cut from the side of the trunk where the rising sun strikes the tree, was used to make an infusion for treating diarrhoea and venereal disease. The wood was used for making implements such as paddles and mauls. Europeans used the wood to form the curved parts of boat frames, in much the same way as they had used oak boughs in Europe.

Gnarly, half-rotten, old trees are precious. We need to cherish them,’ writes the philosopher/environmentalist George Monbiot, in a recent ‘Guardian’ article. ‘Big old trees are the keystone structures of forests on which many species depend.’ This brings to mind the wonderful old tawa, rata and rimu to be seen at Maungatautari, and if you walk to the tower in the Southern Enclosure you can get up close and personal with such ecosystems (see picture). You can see the vines, the epiphytes, the mosses, lichens and fungi that flourish on these giant trees. What you don’t often see are the creatures that make their homes there; kaka, morepork, saddlebacks and even tiny rifleman nesting in rotten hollows, bats sheltering in splits in the trunk, lizards lapping at tiny pools of water in branch forks, weta and the many other insects and their larvae that feed on plants and decaying wood, and become in turn food for larger creatures.

All truly healthy ecosystems, seabeds, meandering rivers, forests, depend on ‘old and gnarly places’; in forests, ancient, even rotting, trees that develop over centuries provide the natural architecture for the slow growth of a rich, complex biodiversity. Replacing an old tree with ‘a dozen saplings in plastic rabbit guards is no more meaningful than replacing [a painting by] an old master.’

This got me thinking about what we do in our towns when we talk of the desirability of providing habitat for bats and a diverse range of insects, lizards, and birds. It is not of course a natural forest environment, but to be in any measure successful it surely requires us to pay more attention to the vital importance of retaining wherever possible our big old trees, both native and exotic.

Alders, whether from Europe, China or the Americas, are humble trees, often going quite unnoticed, except perhaps in winter when their dark silhouettes, adorned with tiny cones, are outlined at the water’s edge. They are the only broadleaf to have cones, but it is their sticky buds and twigs which earn them the name ‘glutinosa’. In the wild their place is boggy bottoms, and since wooden clogs went out of fashion (if they were ever in fashion) it seems nobody has wanted their timber. Never mind that half of Venice is built on alder piles, and that the city state in large measure owed its mercantile and military might to alders – but more on that next month!

In the Waikato, we see them growing at their best along riverbanks, sometimes reaching up to 30 metres. And there is a very good reason for this. They are unusual as a tree in having a symbiotic relationship with nitrogen-fixing bacteria that live in root nodules, sometimes as large as an apple. In exchange for sugars, these bacteria create nitrogen fertilizer for the tree, enabling it to flourish and invade waterlogged ground. Fallen trunks will rot quite quickly in the presence of air, but if they are submerged the wood is stable. A smaller variety, the cut-leaf black alder (Alnus glutinosa lacniniata) grows to about 10 or 12 metres and can be an attractive garden tree. . [ Around the World in 80 Trees and Hugh Johnson’s International Book of Trees]

Introduced in New Zealand in 1914 for the purpose of river bank stabilisation, alder has become almost a weed species along riparian areas of lakes and rivers, especially in the Waikato. But since the twelfth century this humble tree has literally been the foundation of the city of Venice, structurally, economically and militarily.

In air alder logs rot quickly, but when completely submerged in water they retain their compressive strength for hundreds of years. Venice is built on marshland; after systematically walling off and draining small areas, the city engineers drove alder piles through the mud and into the subsoil, using nine logs for each square metre, with the tops well below the lowest tide. Layers of crushed brick and stone were then poured around the piles and thick larch planks laid on top. While the largest stone buildings needed thicker oak piles, much of Venice, including the Rialto Bridge, was built on alder piles.

But the story does not stop there. Venice subsequently became a great military and mercantile power, thanks largely to the alder. Its timber yields the best quality charcoal for manufacturing superior gunpowder, which could fire cannonballs further and faster, and make grenades more destructive. Furthermore, alder burns with a heat fierce enough to smelt iron for making tools and ship components. By the late fourteenth century the foundry area, or Arsenale, had become the world’s biggest industrial facility, where 16,000 workers produced armed ocean-going vessels at the rate of one a day. Large swathes of forest on the mainland, both oak and alder, were set aside for state use, mapped and controlled by a bureaucracy which supervised the work of lumberjacks, sawyers and raftsmen (who floated the logs to market). [Around the World in 80 Trees]

Some of the oldest, gnarliest olives in New Zealand can be found in Cornwall Park, Auckland, but the one shown here is only 12 years old and growing on a hilltop garden near Maungakawa Road. The olive can live 2-3000 years and still produce fruit. The old gnarled trunk can be chopped down and the tree will sprout again from the stump. The undersides of the leaves are silvery due to microscopic scales that reduce evaporation in heat and high wind. Under magnification these scales resemble tiny, frilly, overlapping parasols, about 1/6 mm across.

The olive’s natural range in Europe and North Africa more or less defines the Mediterranean world. These days Spain and Italy are the biggest producers of olives, but in the Middle East it has been used since Neolithic times for food, medicines and oil, for both cooking and lighting. In many languages the words for oil (Italian olio, French huile) derive from the Greek term for olive. Olives for eating are picked both half-ripe and ripe, while olives for oil are always picked ripe. The olive was first taken to Lima in the Americas by the Spaniard, Antonio de Rivera, in 1560.

In Judaism, Christianity and Islam the olive is associated with light, sustenance and religious purifications such as anointings and sacrificial offerings. In the Old Testament story of the flood, it was an olive branch that the dove brought back to Noah as a sign that both the waters and God’s wrath had abated. So the olive branch has also come to symbolise peace. [ Around the World in 80 Trees and Hugh Johnson’s International Book of Trees]