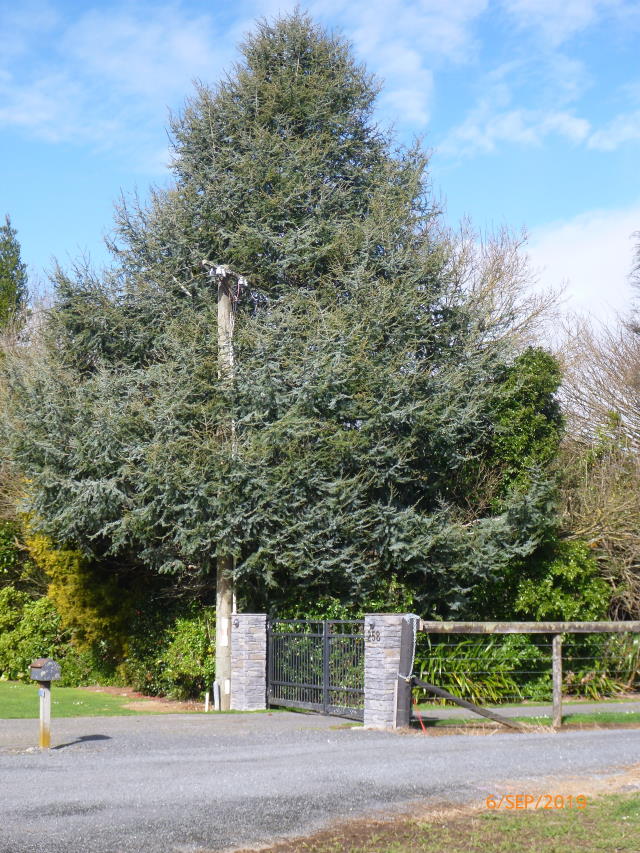 The name cedar is often used for any tree with dark, spicy-scented wood. In Japan there is the plume cedar (Cryptomeria), in North America the incense cedar (Calocedrus), Western cedar (Thuja) and Eastern cedar (Chaemocyparis). But the true cedars, distinguished by their majestic architecture, are only four in number and three of these are found around the Mediterranean. Similar in appearance to the cedars of Lebanon, Cedrus atlantica is a native of the Atlas Mountains of Morocco, tolerating hot dry conditions. Global warming has prompted a search for forest species that will thrive in central Europe and indications are that the Atlas cedar may be most suitable. Its blue form remains a popular garden tree, though not really suitable for a small space due to its colossal spread when mature. Hugh Johnson describes seeing ‘their desperate pale-blue gestures over every little garden wall in some parts of France’.

I remember fondly the blue cedar that grew in the admittedly-large garden of my childhood. At Christmas we decorated it head to foot with handmade streamers, stars and bells, but by the time I arrived at adulthood it was almost out of reach, so only a few of the lower branches could be festooned with tinsel and baubles. Nowadays at 45m high its days as a Christmas tree are over.

The wood of the Atlantic cedar is pale brown with well-defined growth rings. It is durable and notable for its resistance to fungi and termites, but because it tends to distort when drying and may be brittle, it is not particularly good for building. However it is easy to work and takes a fine finish, so is popular for joinery, furniture and veneer. 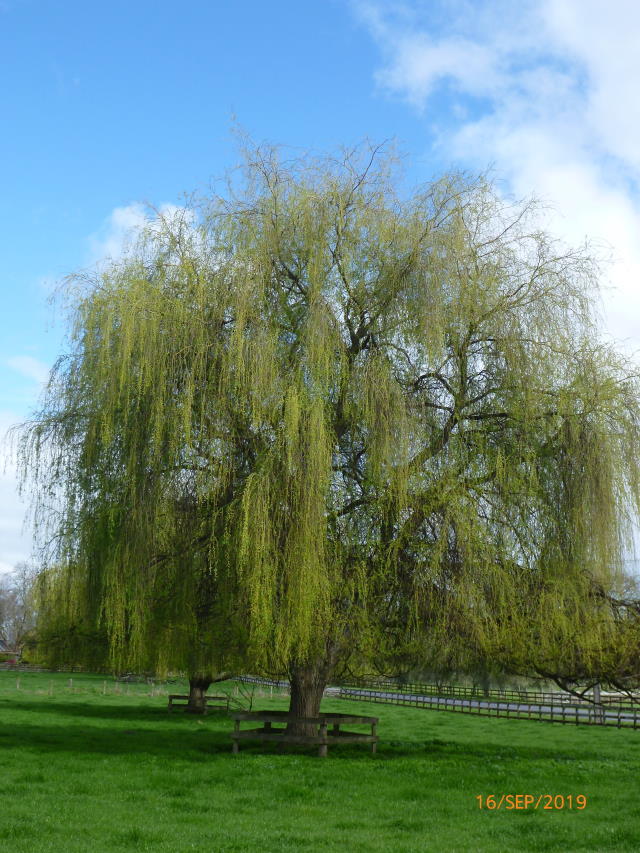 Like the daffodil, the willow is a harbinger of spring. There are 450 species of willow, which are widespread across Europe. Since prehistoric times the long stems from pollarded willow have been used for weaving baskets, boat frames, fences and fish traps. The trees are used in Holland and Belgium as boundary markers, and as such often feature in the paintings of Rembrandt and van Gogh.

The weeping willow, although usually associated with water, actually originated from the dry northern regions of China. Cultivated for millennia in Asia, it spread along the Silk Road to Europe, and was introduced to England in 1730 from Aleppo in Syria. In 1736 it was named by the famous botanical taxonomist, Carl Linnaeus, who thought it was the tree referred to in the Bible, Psalm 137:

‘By the rivers of Babylon, there we sat down and wept when we remembered Zion; We hanged our harps upon the Willow in the midst thereof.’

In fact the trees of Babylon that grew along the Euphrates River were not willows but a ‘weeping’ poplar.

Despite this error the association remains between willows and sadness. In Europe in the Middle Ages a willow wreath indicated that the wearer was in mourning. Such gloomy connotations gradually also came to signify a lover’s rejection, and today in modern Dutch ‘to hang one’s cigarettes upon a willow’ means to give up smoking! In fact far from being the signifier of sorrow, the willow has been known since ancient times as an agent for the relief of pain and fever; in 400 BC Hippocrates prescribed willow bark for rheumatism. The bark contains salicin which is the drug used in modern aspirin tablets. 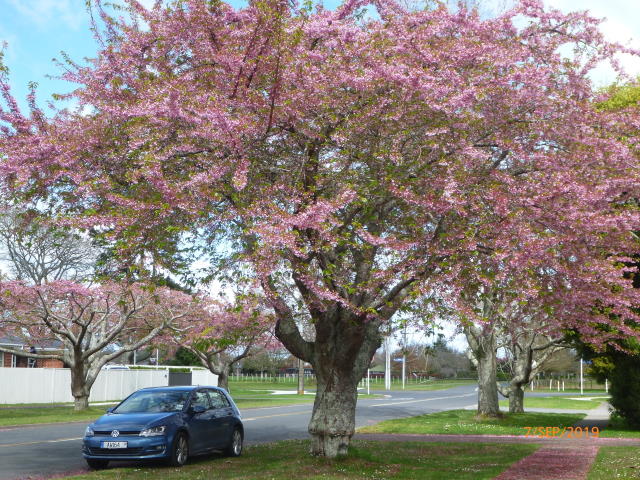 Marking the start of spring, this is one of many flowering cherries that line the far end of Shakespeare St, and just one of the hundreds of native Japanese species and hybrids whose flowers range from white to deep crimson. In Japan the transience of the exquisite cherry blossom is understood to heighten appreciation of its splendour, and this resonates with the Buddhist idea of thriving in the present moment, and the graceful acceptance of destiny and death. In Japan hanami, or the ‘pursuit of viewing and picnicking under cherry blossom’, goes back more than 1000 years; once a purely aristocratic diversion, it has become popularised in the last two or three centuries, and is now a form of mass social bonding. There are daily media reports on the cherry blossom front (sakura zensen) as it travels northwards up the country, and these records are now being used to track climate change. The very pale pink, almond-scented yoshino cherry is so intertwined with Japanese identity that it is used as a rallying cry for Japanese nationalism. The first kamikaze unit had a sub-unit called Yamazakura, (wild cherry blossom), comparing the warriors to blossom, ‘born to live brilliantly and die young.’ (Around the World in 80 Trees) The government encouraged people to believe that the souls of pilots were reincarnated in blossom. Imperial Japanese often planted cherry trees as a way of claiming occupied territory.

In the West the Japanese cherry was hardly known until the early twentieth century when it was popularised by Captain Collingwood Ingram. He even reintroduced the magnificent, spreading white-flowered cherry, tai haku, back to Japan. Shown a specimen in Sussex in 1923, on his next visit to Japan he recognised this cherry in an 18th century book of flower paintings, and was told that it had been lost to cultivation there. All ‘great white’ cherries in cultivation today are the offspring of this English tree. 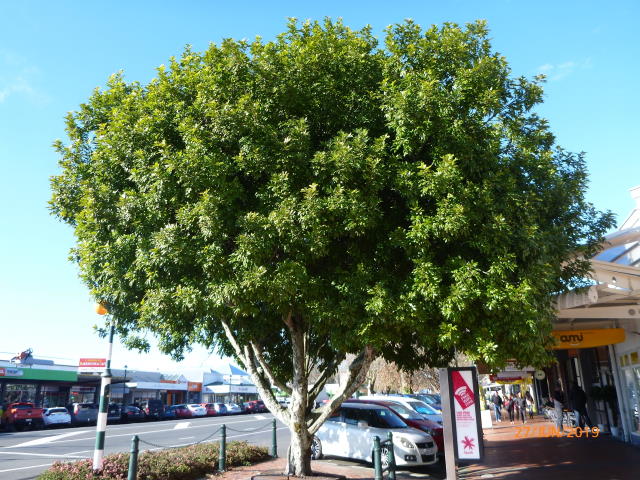 Popular as a street tree, two of these titoki are situated near the lower roundabout on Victoria Street. Normally a lowland forest tree in the North and upper South Islands, titoki has pinnate leaves, a twisting trunk and can grow to 19 metres. Purple flowers in spring are followed by a red fruit, palatable only to keruru, tui and kokako. It is this red fruit, resembling a cockscomb, which gives the plant its name, for Alectryon was a Greek soldier who enraged one of the gods and was turned into a rooster.

Within the fruit are tiny black seeds, highly prized by Maori for the production of a fine oil. Traditionally this was used on hair, and when mixed with red ochre was smeared on the body as a sign of mana. It could also be mixed with sweet smelling flowers or gum to make perfumes. Titoki oil was a status symbol because of its scarcity. Titoki trees were not numerous and many seeds were needed to make a little oil, which had to be extracted by a laborious process involving the application of heat and pressure simultaneously. Hence as a cosmetic the oil was usually reserved for rangatira families. Maori also used the oil medicinally to massage painful joints, to treat wounds and sores and inflamed eyes, to relieve constipation, and to keep insects away. The wood is both strong and elastic and was used by Maori for making adze handles.

The early European settlers used titoki oil for a lubricant in fine machinery such as clocks, and the wood, which takes a polish well, was used for cabinetry and coaches. In time however both groups replaced titoki oil with whale oil which, in the nineteenth century, was much more plentiful and easier to obtain. (Robert Vennell, Meaning of Trees) 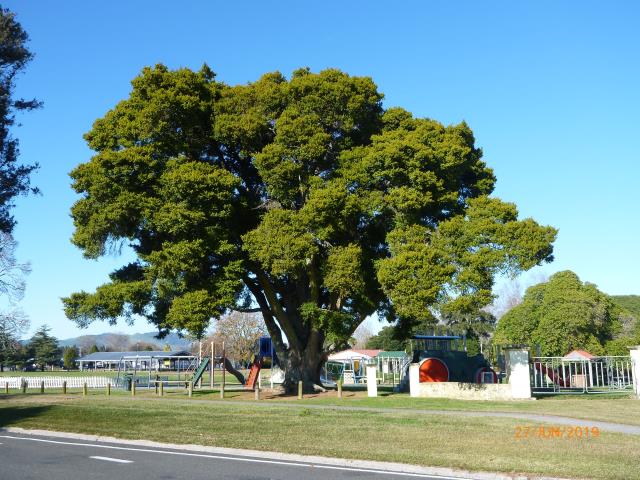 The glory of autumn has now departed, and whilst the bare branches of the deciduous trees still have their own special beauty, it is time to turn our attention for a few months to some more of the evergreen trees around Cambridge. This stunning Totara is to be found in the Leamington Domain near the playground. Endemic to the North Island and the north-eastern parts of the South Island (where it was known as Omakau), it is a lowland species found up to about 600m in altitude. Trees have juvenile, adolescent and mature forms, and female trees have bright red edible fruit. Totara can live up to 1800 years and may reach 30 metres in height with an enormous root system and a trunk of two to three metres in diameter. Regarded as a chiefly tree (rakau rangatira) by Maori, such was its prestige that when an important rangatira died, it is said that a mighty totara has fallen.

The totara is prized above all other trees by Maori who use it for making waka, houses, tools, weapons, musical instruments and toys. Importantly it is the best wood for carving with stone tools. The reddish stringy bark is used to make baskets to hold preserved birds. Since colonisation, totara wood, which is reddish, straight-grained and durable in water, has been used for joinery and furniture, fence posts, wharves and house piles, but is now becoming a rare resource.

The totara also has medicinal properties. The active substances are the diterpenes, totarol and its dimer, podototarin. which have antimicrobial properties, and podocarpic acid, which has astringent, febrifuge/anti-pyretic and oestrogenic properties. Testing has shown totarol to be effective against nematodes, protozoans, insect larvae and a number of bacteria including Mycobacterium tuberculosis, and possibly methicillin –resistant Staphylococcus aureus. It also has anti-inflammatory and antioxidant properties, and at present is mainly used topically for eczema, rash, anti-ageing creams, boils, toothpaste, sunscreen, shampoo, and soap. These antimicrobial substances do not develop in the tree until it is about 150 or 200 years old, which goes to show that we should treasure our old trees. You never know what they will come up with! (some information from The Meaning of Trees by Robert Vennell) 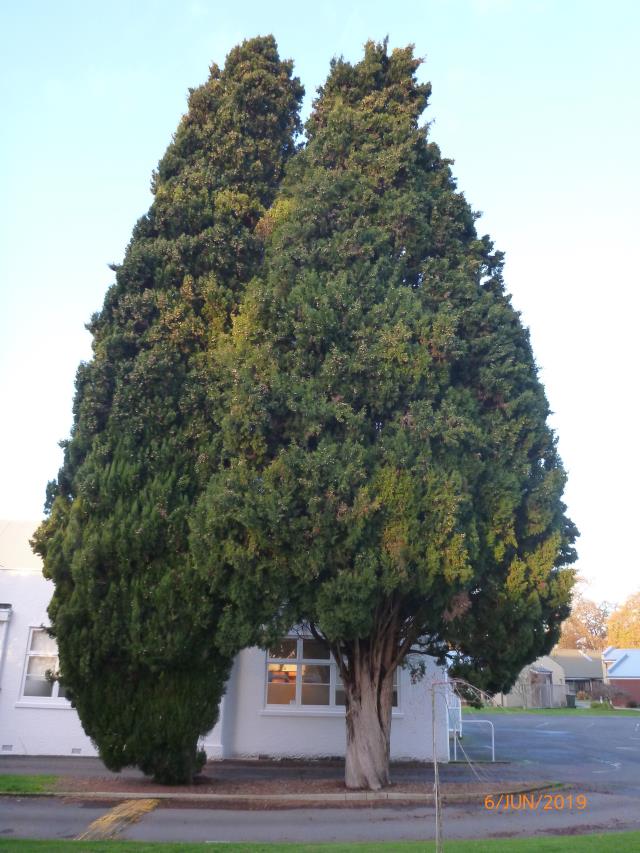 These two trees stand in the grounds of St Andrews Church. The seeds were brought back from the Garden of Gethsemane in 1956 by Basil and Cynthia Hewett, and raised at McWhannells nursery before being planted at St Andrews. It is thought that this fastigiate variety of cypress (stricta) was an ornamental Roman cultivar of the original spreading variety (horizontalis). Popular throughout the Mediterranean, its tall columnar form punctuates the landscape of southern France, Tuscany, Greece and the Middle East and parts of North Africa. The ancient Egyptians used the resinous wood to make sarcophagi and insect-proof chests.

The cypress tree gives its name to the island of Cyprus, where it is native. The copper mines on this island were vital to the Romans for making bronze. They called copper the ‘metal from Cyprus’ or aes Cyprium, which then became cyprum or cuprum, the source of the chemical symbol Cu which is used today.

The tree is named after Cyparissus, a mythical figure who accidentally slew Apollo’s favourite stag. Full of remorse (and probably scared stiff), he begged that his grief would last forever, whereupon Apollo turned him into a cypress tree, whose resinous sap is said to represent his tears. The cypress thus became the symbol of the Underworld, eternal death and the immortal soul, and is still widely planted in cemeteries, including that of Cambridge.

(source: Around the World in 80 Trees by Jonathon Drori)